by Rajul on July 9, 2015 in Entrees, Gluten Free, Miscellaneous, Recipes

It’s always a special blessing when you become good friends with someone in your own family. One of my husband’s cousins is married to an awesome woman who I am so glad to have as a friend. We relate on so many things, food of course included! We trade and recommend recipes and whenever she tries one of mine, she always kindly reports back. She suggested this online recipe for a cauliflower based pizza crust and we decided that whoever tried it first should review it! The author said that most of these recipes call for eggs but it made her crust too soggy so she came up with a flax version instead. (Generally, 1 tbsp ground flaxseed + 3 tbsp water = 1 egg in most recipes!) Cauliflower crusts are all the rage right now with gluten free, grain free, Paleo, low carb, and other diets gaining popularity. After making my first cauliflower crust pizza, I can now see what the hype is. I did not get the chewy or crispy consistency of a traditional baked dough but it still very much tasted like a pizza and not at all like actual cauliflower.

My only two issues with this recipe are that: 1. It is a little time consuming: you have to wait for the mixture to cool so you can wring out the boiling water and it involves a total baking time of around 35 minutes. My traditional recipe takes about the same time too though as I wait at least one hour for my dough to rise but produces 2-3 pies. 2. My edges got nice and crisp but the rest of the pizza was soft. Perhaps I’ll try to press it down thinner. I never dreamed that the first pizza in my cast iron pan wouldn’t be a buttery deep dish one!

– You need a 12 inch cast iron skillet, oiled. I have yet to try this recipe in a cookie sheet or other type of baking dish

Her recipe calls for 1 tsp of salt but I only had 1/8 tsp left and it was fine!

Any additional preferred toppings such as herbs or more veggies!

Place water to boil in a large pot and meanwhile chop cauliflower into florets and pulse in a food processor until they resemble fine granules.

Boil for 5 minutes with the lid on.

Drain and let cool. Then wring out as much excess fluid as you can in clean kitchen towels. The next steps are outlined with photos so you know what to expect.

Place in a mixing bowl.

Mix in cheese and spices

I topped mine with fresh basil and fresh oregano from the garden.

Allow pizza to cool if you prefer more formed slices or dig in while it’s hot!

Whether celebrating winter holidays is your tradition or not, there is something in general about the year ending up that makes life incredibly hectic. My dog Bella tries to help with all of the wrapping. In addition to the usual Christmas shopping and parties we have this time of year, my daughter's dream of having a [...]

Our family loves eating Asian food but we minimize dining out in general due to cost, ingredients, high sodium and sugar content. Our favorites, Chinese and Thai restaurants, often use genetically modified soy which has been treated with the Round Up. The movie Food, Inc. (please see this preview) is a mind blowing documentary about the U.S. food industry [...]

Your kids (and you!) can cool off with this frozen treat without a sugar crash and while getting oodles of good-for-you fruit, fiber, and vitamins in these Apple Berry Cinnamon Mango Vanilla Pops.   These *silicone pop making sleeves are much easier to pour your liquid into and unlike a popsicle, less drips and clean up. *(I originally [...] 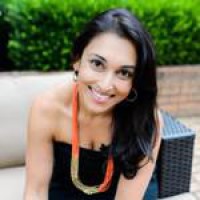